On the third day of the monsoon session of Parliament, the numerous Bills, including the ones on banking regulation and homoeopathy, will be introduced in the two Houses. Govt ignoring Siddha, promoting Ayurveda

From September 15, Rajya Sabha is being convened in the morning and Lok Sabha in the afternoon.

Here are the live updates:

AIADMK MP M. Thambidurai echoes previous speaker Mr. Reddy’s points, and says that there should be an institute of national importance in every state, not just Gujarat. You have to promote siddha, unani and others, he says.

CPI(M) MP from Kerala K.K. Rajesh asks why Kerala did not pop up in the government’s mind when such a decision was made, since the State is the hub for ayurvedic medicine.

He says he is not opposed to the Jamnagar institute, but Kerala should have been given an institute of national importance for ayurveda.

Chairman Naidu says that he has visited Kottakkal Arya Vaidyashala in the State. “I enjoyed the visit,” he says, commending Mr. Rajesh for making a “good point”.

YSRCP MP V. Vijaisai Reddy supports the Institute of Teaching and Research in Ayurveda Bill, 2020. He says it is a part of the education reforms of the government. It will help creating trust and confidence in ayurveda, he says.

He makes two suggestions — non-inclusion of yoga and naturopathy in Indian system of medicines, and the need to address quackery in ayurvedic sector. He adds that such an institute should be established in each State, and not just Gujarat.

DMK MP M. Shanmugam says the Institute of Teaching and Research in Ayurveda Bill, 2020 will confer the tag of national importance to an institute, once again in the “favoured State” of Gujarat. He asks the government the reason behind picking Gujart when there are existing institutes with better facilities in other States.

He says government is letting down Siddha medicine that hails from Tamil Nadu.

The Institute of Teaching and Research in Ayurveda Bill, 2020 is being considered. The Bill was passed in Lok Sabha during Budget session.

The Institute of Post Graduate Teaching and Research in Ayurveda, Shree Gulabkunverba Ayurved Mahavidyalaya, Jamnagar and the Indian Institute of Ayurvedic Pharmaceutical Sciences will be merged.

Trinamool Congress MP Dr. Santanu Sen says ayurveda institutes in other parts of the country are in poor conditions, but the government is focused on institutes in Gujarat only. 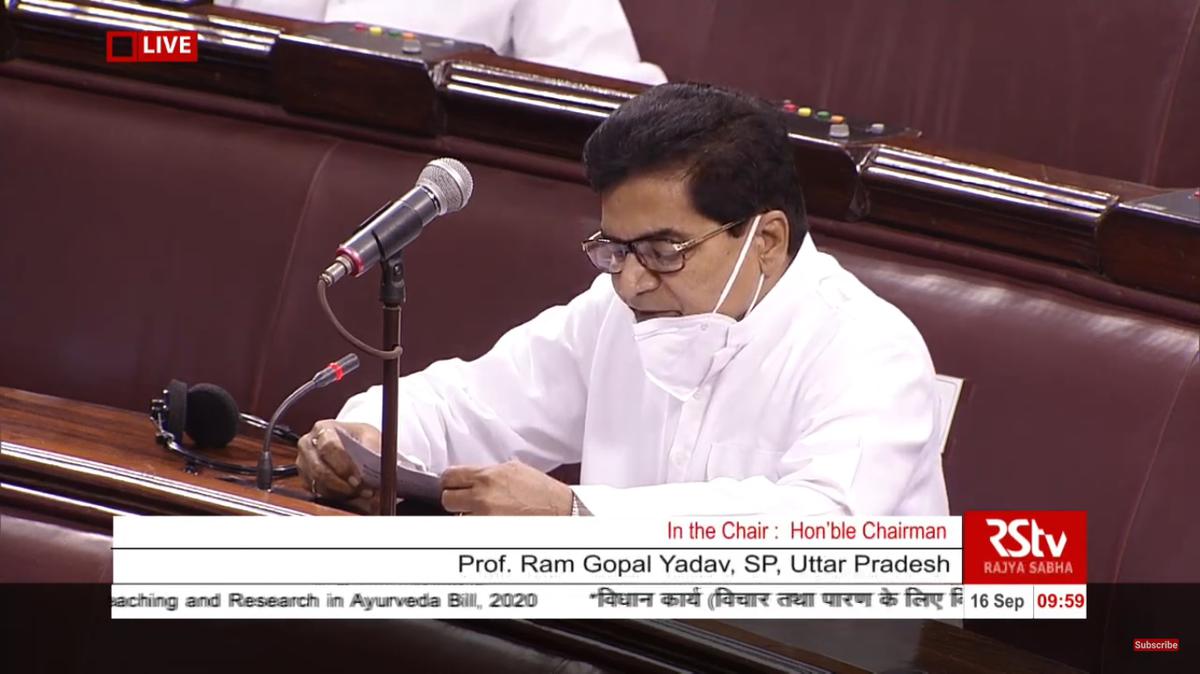 Samajwadi Party MP from Uttar Pradesh Prof. Ram Gopal Yadav questions the source of the funding for the institutes. He also sparks a brief discussion on the public health guidelines issued by ICMR with regard to the use of masks and social distancing.

Chairman Venkaiah Naidu says ICMR director told him it’s best to wear masks, in response to Mr. Yadav’s query on whether he can take off his mask while speaking.

Congress MP Partap Singh Bajwa raises matter of Punjabi language not being included on the list of official languages in Jammu and Kashmir.

Chairman tells government to look into the veracity of the matter.

Congress MP Mallikarjun Kharge raises the matter of National Education Policy. He says poor children will have a disadvantage when they start school as there is no clear policy on angadwadi teachers

Ruckus over vandalism in Visva Bharati

Chairman Venkaiah Naidu reminds members not to make any allegations in Zero Hour, after Mr. Dasgupta said the local administration did not keep the university safe. Mr. Naidu points out that Mr. Dasgupta did not name any State, and hence the comments will go on record.

Congress MP Digvijaya Singh raises matter of the increasing prices of oxygen during the COVID-19 pandemic and shortage of oxygen. BJP MP Dr. Bhagwat Karad says oxygen cylinder rate should be uniform and regular supply should be there in the whole country.

Samajwadi Party MP Javed Ali Khan raises matter of low prices being given to wheat farmers. He says that when he went to sell his own wheat crop in Uttar Pradesh, he also faced the same problem.

Chairman Venkaiah Naidu asks the Leader of the House to look into the matter.

NCP MP Vandana Chavan raises issue of deprivation of a large portion of students when it comes to online education, cites the suicide of a Class 10 student in Maharashtra as he did not have a phone.

“We have a student population of 240 million and we cannot fail our young. I urge the government to make a basic digital device available to every student who does not have it, says Ms. Chavan.

Congress MP P. Bhattacharya suggests setting up a national homeopathy helpline. He lists out the benefits of the stream of medicine, and concludes by saying that in his personal experience, homeopathy has been very helpful.

Leader of Opposition Ghulam Nabi Azad raises the matter of unemployment in Jammu and Kashmir. He says that the UTs have seen no tourism, employment opportunities and economic activities since its status was downgraded 13 months ago.

“In Jammu and Kashmir, there was a self-help group of unemployed engineers and they had 5% reservation in development works. Nearly 15,000 such engineers used to work through this from 2003, but four days ago the government has ended the self-help groups. Centre should restart the scheme,” says Mr. Azad.

Chairman hopes that the Centre will pay attention to this request. 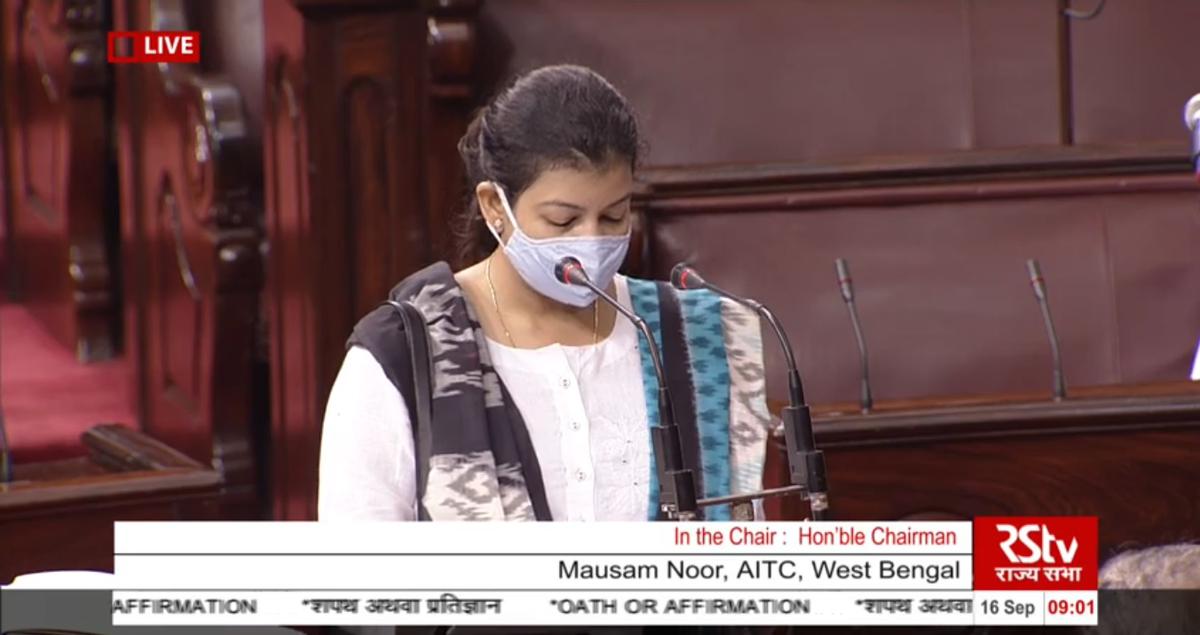 New member Mausam Noor takes oath as the member of Rajya Sabha. Ms. Noor was a Congress MP from Malda in 2014 but joined the TMC before the 2019 Lok Sabha poll. She was defeated by BJP’s candidate Khagen Murmu, formerly with the CPI (M) in 2019.

Papers were laid on table on behalf of MoS Home Affairs and Social Justice and Empowerment. Chairman Venkaiah Naidu reads out a list of MPs who sought leave of absence, including former PM Dr. Manmohan Singh. House grants permission.

Motion for election of one member to the Rubber Board adopted.